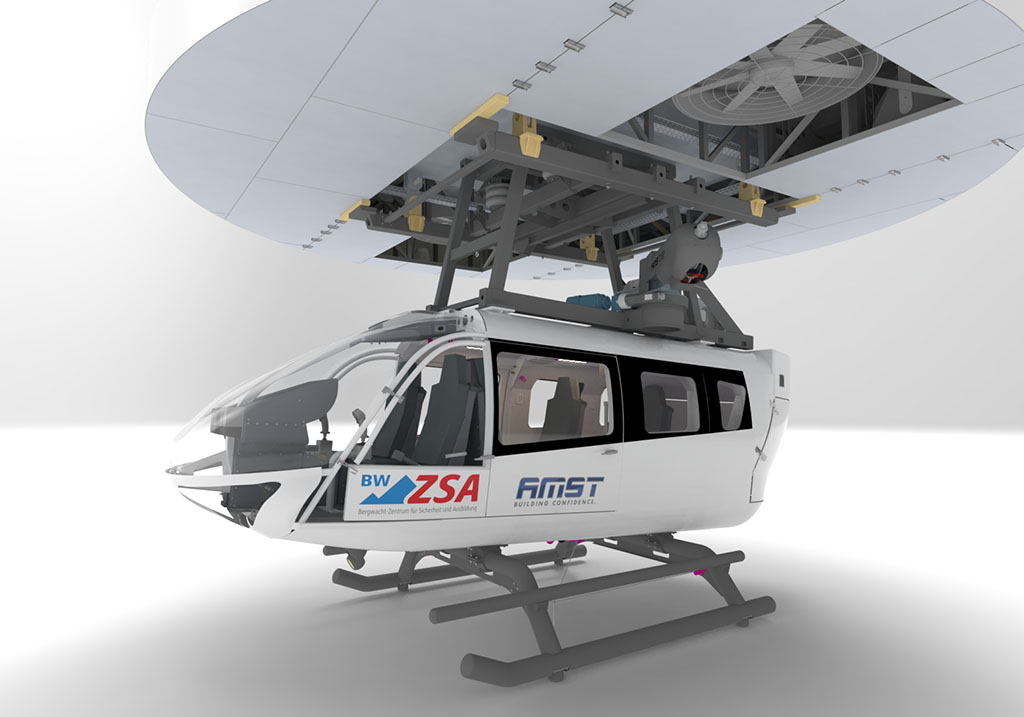 Cooperation between AMST and the Mountain Rescue Center for Safety and Training (Bergwacht-Zentrum für Sicherheit und Ausbildung, BW-ZSA) Reaches the Next Level

Bad Toelz, Germany/Ranshofen, Austria, November 2022 – From mid 2023, a newly developed helicopter simulator from AMST will be installed in the Bavarian Helicopter Simulation Center for the training of emergency services. The device will replace the BK 117 simulator that has been in operation since 2008. The need to upgrade the aircraft type in the training center is due to the Airbus H145 becoming the dominant air rescue helicopter type in the Alpine region and in Germany, alongside the slightly smaller H135. The H145 is also frequently used in neighboring European countries for governmental aviation and air rescue purposes.

The new H145 helicopter airframe is a joint project between AMST, a leading manufacturer of simulation and training equipment from Ranshofen, Austria, and the Mountain Rescue Foundation (Stiftung Bergwacht), which operates the Bavarian Helicopter Simulation Center in Bad Toelz, Germany. With a utilization of around 300 days per year, over 4,000 emergency personnel are trained in helicopter operations annually at the center. Training topics range from general safety procedures, to working with the rescue hoist and specialist abseiling maneuvers for police and military special units.

Franz Pflug, Managing Director of AMST, on the collaboration: “We have been cooperating with the Mountain Rescue Service since 2014. In 2016 we delivered a second large-capacity helicopter airframe to the training center. We are proud to be able to market the unique and patented training system developed by the BW-ZSA, in which helicopter airframes suspended from cranes fly through a large facility. Several of these systems are currently under construction around the world. The H145 airframe demonstrates how we work together in a future-oriented and reliable manner in order to constantly optimize the quality of training.”

The new type-specific H145 airframe will be very similar to the original aircraft in terms of external appearance, interior and feel, thus allowing for highly immersive training. The lightweight construction is designed to withstand the constant stresses of training, including water rescue. The winch can be installed on the left or right side of the aircraft. Other procedures, such as rappelling and fast-roping, can also be trained.

Another step in the development is the versatility of the cabin. It will be possible to reconfigure the interior within a minimum period of time due to the true-to-original design of the installed rail systems. In addition to different seating variations, medical equipment and patient stretchers, it is also possible to re-role the simulator purely as a transport aircraft. Within a short set-up time, the cabin can be repurposed as a rescue, police or military helicopter.

The simulation of rotor downwash and the possibility to play back helicopter noise from outside and inside the simulator contribute to the highly immersive training capabilities.

The new helicopter simulator will be state-of-the-art in terms of safety technology, equipped with the latest communication and video surveillance equipment. “The requirements we defined for the new helicopter simulator can all be met – maximum realism is a central element for the success of our training programs.” says Tobias Vogl, Head of the Mountain Rescue Training Center in Bad Toelz.

The synthetic training environment offers enormous advantages in the context of joint training. In particular, the interaction between crew members and specialized task forces (so-called “task specialists”) temporarily taken on board during helicopter operations can be trained realistically in the center.

In addition to the enormous cost savings when compared to training on a real helicopter, the benefits of a significant reduction in environmental pollution, short preparation times, fail-safe feasibility (independent of wind and weather), higher throughput and added pedagogical value also play a significant role in training with the simulator. On the one hand, scenarios can be reliably reproduced at any time, enhancing standardization; on the other, the system offers the flexibility to expand and diversify the training as needed.

By establishing the right balance between training on the simulator and the real aircraft, not only rescuers and crew members benefit from this sophisticated and safe training concept, but also the people who depend on help from the air.

About AMST
For four decades, AMST has been offering its customers outstanding solutions in the fields of simulation and aerospace medicine. It is a technological leader in these specific key areas. The product portfolio ranges from human centrifuges, pressure chambers and spatial disorientation trainers, to highly immersive full flight simulators with a best-in-class image generator, as well as complex training environments for realistic night vision and search and rescue training. Many of the solutions developed by AMST are unique. All products come with a comprehensive service package. In addition to reliable technical support over a product’s entire lifecycle, services such as the design of and construction support for turnkey training centers are also available.

About the Bavarian Helicopter Simulation Center in the Mountain Rescue Center for Safety and Training (BW-ZSA)
The BW-ZSA has been in operation since 2008. In addition to the two air rescue simulators, installations such as climbing walls, caves, cable car gondolas, cold chambers, trauma rooms and operations centers enable standardized and realistic practice of a wide range of scenarios. In addition to the training, the center is now a meeting point and networking platform for all those involved in operations in Bavaria, at the federal level with regular visits from abroad. Together with partners in air rescue, various issues are dealt with, standard procedures are developed and these are transferred to day-to-day operations. Both the procedures and the material, such as personal protective equipment and rescue equipment, can be tested and jointly defined in the Center for Safety and Training. The Mountain Rescue Foundation owns the simulation facility and operates it together with the Bavarian Mountain Rescue Service.